Synopsis
Award-winning filmmaker Andrea E. Leland collaborated with James Brewster to create a 70-minute documentary and archiving project. The result of their collaboration is a spirited musical journey to the Caribbean focusing on Scratch band music (also known as Quelbe) , an indigenous, grass-roots form of folk music from the Virgin Islands that was recently declared the “official” music of the Virgin Islands. 79-year old James Brewster, the central character of this documentary, is an uncompromising, humorous, and provocative musician known for his playful compositions and lively performances and is the legendary ‘King of Scratch’.

This engaging documentary includes performances by Jamesie and the All-Stars at a St. Croix nightclub; an agricultural fair on St. Croix; the World Music Festival and the Old Town School of Folk Music in Chicago; the Lotus Music Festival in Bloomington, Indiana; jamming with his friends; and performing and teaching in Denmark. Interspersed with these performances is more intimate footage of Jamesie talking with other musicians about the historical significance of the music and explaining how he came to create some of his songs and footage at his home revealing his more personal side. The documentary celebrates Scratch band music and one of it’s most legendary performers. It provides a unique opportunity to view up close and personal the US Virgin Islands’ deep-rooted musical tradition. 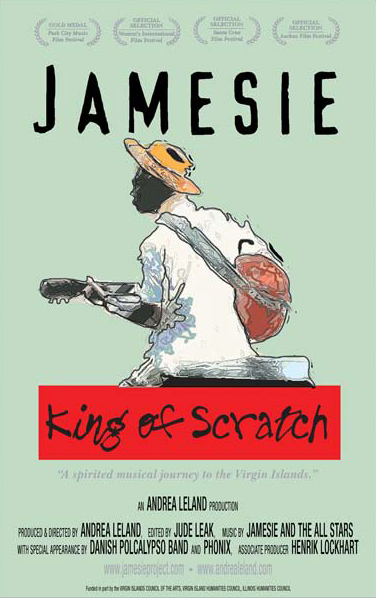