On Friday 27 January, 2017, DocuDoka will focus on the help and harm of volunteer tourism. The engaging film and discussion night in creative bar Doka will start with the world premiere of Making a Difference (2017), a documentary on voluntourism made by Dutch film trio Brechtje Boeke, Kuba Szutkowski and Reinier Vriend. After the screening they will open a discussion on the ethics of voluntourism together with Krista Arriëns from Rambam, the satirical journalistic Dutch television program that recently aired a critical episode on voluntourism.

Being a combination of volunteering and tourism, voluntourism is a popular form of tourism in which travellers also participate in voluntary work, typically in the global South. However, while volunteer tourists – roughly ten million a year – want to make a difference, voluntourism has become a highly ambivalent global industry. The value of voluntourism in terms of economic growth, social justice and psychological welfare in the host countries is increasingly questioned. On top of that, travel companies organizing volunteer abroad projects are often linked to a lack of transparency and accountability – and seem to be the only parties that are ultimately benefitting from the projects. Altogether, it raises the question: Is voluntourism doing more harm than good?

This pertinent question is the starting point of Making a Difference, a new 40-minute documentary exploring the rights and wrongs of international volunteering. To find the answer, the two friends Kuba Szutkowski and Reinier Vriend set up their own volunteer abroad program: a group of twelve aspiring Dutch film-makers and good-doers who join the duo on a journey to document the volunteer industry in Cape Town, South Africa, where voluntourism is one of the fastest-growing travel sectors. During the filmmaking project the ironies of the industry slowly but steadily present themselves. Not only do the volunteers discover the questionable sides of volunteering, Kuba and Reinier also find out how hard it is to run a transparent and accountable volunteer organisation.

After the documentary there will first be a short Q&A with the filmmakers and then, after the break, a discussion with Reinier Vriend, who is also the CEO of Volunteer Correct, a non-profit organization committed to more transparency and accountability in international volunteering. Krista Arriëns, researcher and presenter of the TV program Rambam will join the discussion as well to tell about her experiences while doing research for their critical episode on orphanage tourism. The discussion will be accompanied by several clips and there will be space for questions from the audience. Both the screening and discussion will be in English.

Tickets for the fourth edition of DocuDoka are available online for €10 (€7,50 for students when showing a student ID at the door) at http://bit.ly/docudoka4-voluntourism. If not sold-out in pre-sale, tickets can be bought at the door as well, but seating is limited, so advance ticketing is advised.

DocuDoka is an initiative of creative night bar Doka in collaboration with the Department of Media Studies of the University of Amsterdam, the Hospitality Knowledge Centre of the Saxion University of Applied Sciences, cultural organization Caribbean Creativity, and media agency Gasten in je Gezicht. It is an engaging film and discussion night on the adverse effects of globalization. Every two months (usually the last Friday of that month) an urgent issue in today’s global society is discussed on the basis of a documentary and discussion with special guests and the audience. The first series focuses on the impact of tourism. What are the effects of modern tourism on people and the environment? 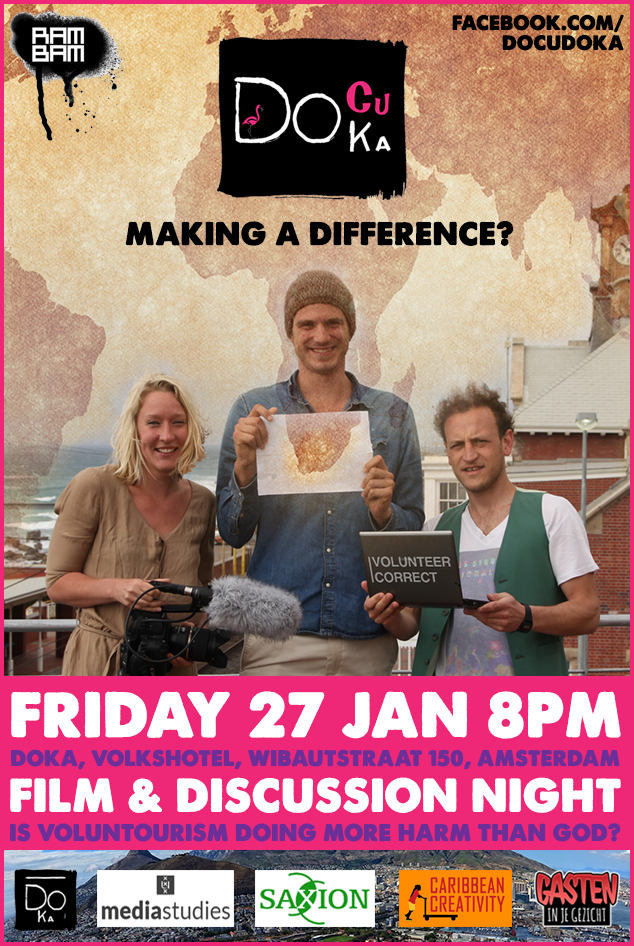