DocuDoka #5: Are Tourists and Refugees Getting Along?

On Thursday March 30th DocuDoka will focus on the encounters between tourists and refugees. The night in Doka will kick off with the screening of Holiday for Everyone (2017, Vakantie voor iedereen), a new documentary by Dutch film trio Annelies Wezenberg, Mark Koster and Rik Lauwen about a temporary centre for asylum seekers on a holiday park in the Dutch province of Zeeland and their contact with the Dutch vacationers. After the screening, which will also include a short film and a news report on similar encounters in the Mediterranean region, we’ll have a interactive discussion with the filmmakers as well as two experts, former refugee worker Rebecca Streng and critical tourism philosopher Ruud Welten.

Program DocuDoka #5: Are Tourists and Refugees Getting Along?
20.00 Doors open
20.15 Introduction by Inge Hermann (Saxion University of Applied Sciences)
20.25 Screening of Waste no 2 Wreck (2016, 10 min) and With Sunweb to Lesbos (2016, 12 min).
21.50 Screening of Holiday for Everyone (2017, 40 min, Vakantie voor iedereen)
21.30 Break
21.45 Discussion with the filmmakers and former refugee worker Rebecca Streng and critical tourism philosopher Ruud Welten
22:30 End, possibility to chat at the bar, start regular Doka night (until 7am!)

INTRODUCTION
Since the European refugee crisis, places where migrants appear seem to have become ‘infected zones’ for tourists. Particularly the once-so-beloved Greek islands of Lesbos and Kos are nowadays largely shunned by European holidaymakers because of the large numbers of refugees arriving and staying there. At the same time, the contact between refugees and tourists has also significantly increased. Encounters between these two different groups of ‘travelers’ are often unexpected, such as when their paths cross at moments that exhausted refugees arrive on a beach where tourists are unknowingly sunbathing. Increasingly, however, these interactions are put in motion by European travel and aid companies in the form of refugee assistance. How do these encounters between tourists and refugees look like? How does their contact play out and what does it create, more understanding or more distance? And, on a more abstract level, how could we better understand the different freedoms and rights to travel, reside en be? These questions form the basis of DocuDoka #5: Are Tourists and Refugees Getting Along?

SHORT FILMS
The evening will kick off with the screening of the short documentary Waste no. 2 Wreck (2016) and the PowNed news report With Sunweb to Lesbos (2016, Met Sunweb naar Lesbos). Wreck is a poetic narrative by Finnish filmmaker Jan Iiyas on the refugee boats that are left at the Italian island of Lampedusa. Near Rabbit Beach, once voted the most beautiful beach in the world by TripAdvisor, is now a graveyard of boats and other ‘waste’ of refugees. With Sunweb in Lesbos shows how PowNed reporter Rutger Castricum went on a so-called ‘refugee holiday’ to Lesbos last year. Organized by Sunweb in collaboration with Transavia and the Movement On The Ground Foundation of Johnny de Mol, Rutger worked for a week as a volunteer on a refugee camp while returning to his comfortable hotel resort every day. Although the refugee holiday package was quickly put to an end due to a lack of interest, the report shows, both ironically and painfully, where the ideas and actions of tourists (and the tourism industry at large) class with those of refugees.

MAIN FILM: HOLIDAY FOR EVERYONE / VAKANTIE VOOR IEDEREEN
Following the two short films, the program will continue with the screening of Holiday for everyone (Vakantie voor iedereen), a new documentary byAnnelies Wezenberg, Mark Koster, and Rik Lauwen on the encounter between tourists and refugees in the Netherlands that will be shown with English subtitles for the first time. At the height of the refugee crisis in 2016, a unique social experiment took place in holiday park Marina Beach in the Dutch province of Zeeland. Asylum seekers were housed in the same blue caravans as the vacationers, who were initially not very happy with the arrival of these refugees. Holiday for Everyone provides a unique insight into how the two groups try to live with each other while being away from home. Can tourists and refugees live together on a holiday park?

DISCUSSION
After the screening there will be a discussion with the filmmakers and two experts, Rebecca Streng and Ruud Welten. Streng served as volunteer coordinator of Boat Refugee Foundation (Stichting Bootvluchteling) at a refugee camp on the Greek island of Leros and has, as such, experienced the encounter between refugees and tourists first hand. Welten is Professor in Philosophy (Erasmus University Rotterdam) and Lector in Ethics and Global Citizenship (Saxion University of Applied Sciences) and has written a lot about the interactions between tourists and refugees. Both the screening and discussion will be in English. 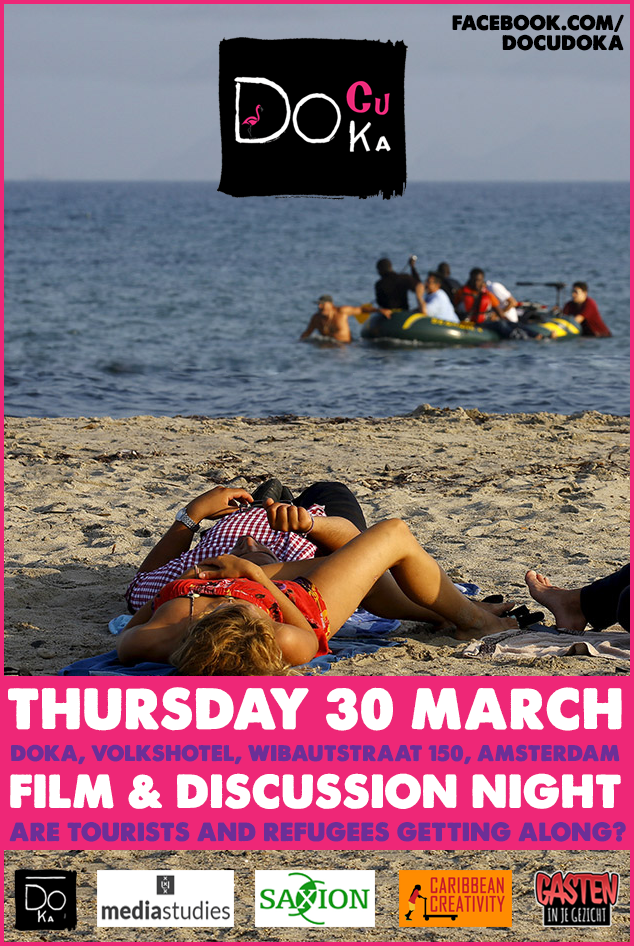 About DocuDoka
DocuDoka is an initiative of creative night bar Doka in collaboration with the Department of Filmstudies of the University of Amsterdam, the Hospitality Knowledge Centre of the Saxion University of Applied Sciences, cultural organization Caribbean Creativity, and media and events agency Gasten in je Gezicht. It is an engaging film and discussion night on the adverse effects of globalization. Every two months an urgent issue in today’s global society is discussed on the basis of a documentary and discussion with special guests and the audience. The first series focuses on the impact of tourism. What are the effects of modern tourism on people and the environment?