On Friday, December 2th, the Volkshotel will host the third edition of their bimonthly film and discussion night DocuDoka in club Doka, located in the basement of the Volkskrant building. The central question of the night will be: why is child sex tourism so difficult to prevent? This question will be addressed by screening two new documentaries on child sex tourism, SOS: Sold Out Slaves (2016) and Fallen Angels (2016), and there will be a discussion afterwards with Celine Verheijen (Defence for Children) and Anneke Koning (Institute of Criminal Law and Criminology) and the audience. The moderator will be Inge Hermann, Associate Professor Ethics & Tourism at Saxion University of Applied Sciences.

SOS: Sold Out Slaves and Fallen Angels are both investigative documentaries produced by RT Doc, an English-language documentary channel created by Russian media company RT. SOS: Sold Out Slaves is a short documentary directed by Alexander Avilov on Kenya’s growing child prostitution crisis. Kenya is currently in the top 5 world destinations for child abuse. In 2006 UNICEF published statistics that indicated that, due to the poverty situation, about a third of children in Kenya is involved in some form of prostitution and one out of ten is involved in sex trade. In this film, young prostitutes talk about how they got involved in this trade and why they see no alternative solutions at hand. SOS also features child protection representatives to find out what’s being done to help the victims and to combat child prostitution in Kenya.

The second documentary, Fallen Angels, is directed by Alyona Simikina and focuses on Angeles City in the Philippines, a well-known sex tourism destination. Hundreds of local young women work in the bars and night clubs offering services for money they desperately need to make ends meet for their families. The real victims though are the sex workers’ children, conceived by foreign travellers, on which this documentary focuses. They stand out in the crowd because of their mixed-race appearances, but they’re not an unusual sight, as there are many children of the sex trade within their communities. In most cases, these kids have never met their fathers, who either don’t know or care that their own offspring has been left behind. The RT Doc film crew visits Angeles City to meet these children and to reveal their lives and dreams.

The discussion panel of the night will consist of Celine Verheijen (Defence for Children) and Anneke Koning (Institute of Criminal Law and Criminology). These two experts in the field of child sex tourism will stimulate and engage in a lively discussion with the audience. The documentaries will be in English (with English subtitles), as well as the discussion, to enhance inclusion and participation of the audience. Tickets for the event are available online for €10 at http://bit.ly/docudoka3. Purchasing tickets at the door is also possible for the same price, but is not recommended due to the limited number of seats available.

Program DocuDoka #3: Why is child sex tourism so difficult to prevent?

22.00    Discussion (‘nagesprek’) with Celine Verheijen (Defence for Children) and Anneke Koning (Institute of Criminal   Law and Criminology) and the audience 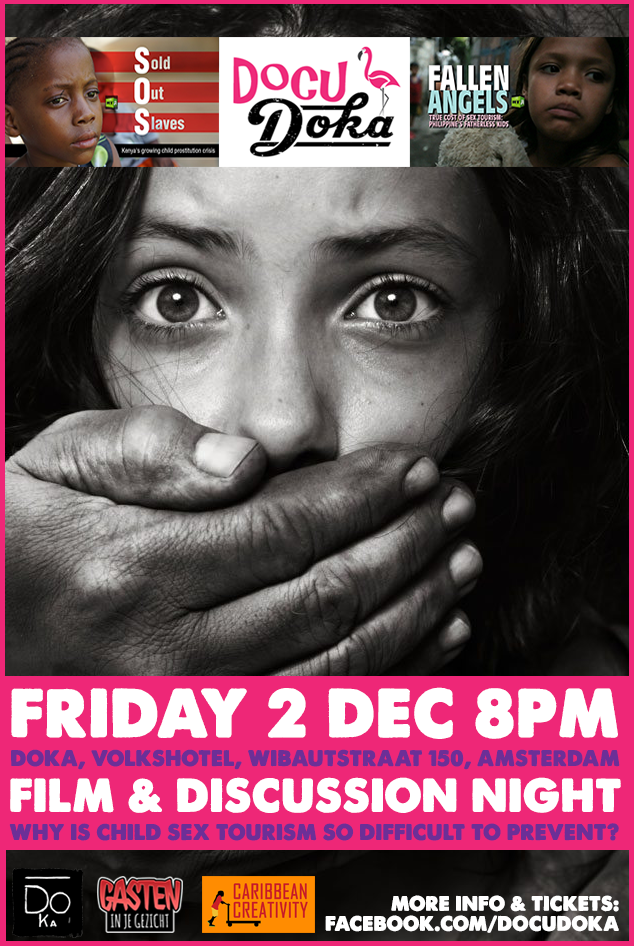