DocuDoka X ASCA: How Do Refugees Find Their Identity?

On Thursday November 23rd, DocuDoka, in collaboration with the Amsterdam School for Cultural Analysis (ASCA, UvA), organises a film and discussion night on the search for identity amongst refugees. The night in creative bar Doka starts with the exclusive Dutch première of the award winning documentary Growing Up Hmong at the Crossroads – Enfance hmong à la croisée des chemins (2017). For this special occasion the maker of the film, Prof. Safoi Babana-Hampton, accompanied by her research collaborator and videographer Dan Dapkus, will come to Amsterdam. The screening will be followed by an interactive discussion with Babana-Hampton, Dapkus, and two experts about the painful search for identity amongst refugees.

FILM: GROWING UP HMONG AT THE CROSSROADS (19.15 hrs)
Growing Up Hmong at the Crossroads – Enfance hmong à la croisée des chemins gives a unique insight into the struggles that children of Hmong refugees from Laos often find themselves in. How do they relate to the cultural heritage and historical memory of their parents? How do they create a feeling of home and belonging to a certain place in a world where xenophobic perceptions grow stronger every day?

The film, which already won two awards at international film festivals, demonstrates that the French colonial past and American military intervention in Vietnam still have a great impact on the younger generation’s sense of place and belonging, and that, at present, the heated migration debate is shaped by these realities. The Hmong community seems to have found a place in its new country, but how have the children of these refugees succeeded to find their identity? How did their journeys look like and what price did they pay for it? And what does it teach us about the current debate on migration and refugees in the Netherlands?

Growing Up Hmong at the Crossroads – Enfance hmong à la croisée des chemins is a 2017 production of Michigan State University in partnership with the University of Illinois Urbana-Champaign Humanities Without Walls Consortium, funded by a grant from the Andrew W. Mellon Foundation. Institutional project partners include Indiana University, the University of Michigan, the Musée de l’Histoire de l’Immigration (France) and the Collège d’Études Mondiales (France).

DISCUSSION ON THE SEARCH FOR IDENTITY AMONG REFUGEES (21:00 hrs)
After the screening there will be a discussion with the filmmaker, the research collaborator, and two experts in the field of identity and migration: Ieme van der Poel and Yolande Jansen. Van der Poel is Professor Emeritus at the University of Amsterdam / Universiteit van Amsterdam, and is specialised in French postcolonial studies. Jansen is Associate Professor of Philosophy at the Amsterdam Centre for Globalisation Studies, as well as researcher at the UvA and VU. Her field of work is social en political philosophy, multiculturalism, migration, Judaism, and Islam in Europa. The night will be led by Patricia Llorens of ASCA. Both the film and discussion will be in English.

Tickets for this 8th edition of DocuDoka are available online for €10 at http://bit.ly/docudokaxasca (€7,50 for students when showing their student ID at the door). If not already sold-out in pre-sale, tickets can be bought at the door as well. As seating is limited, advance ticketing is advised. 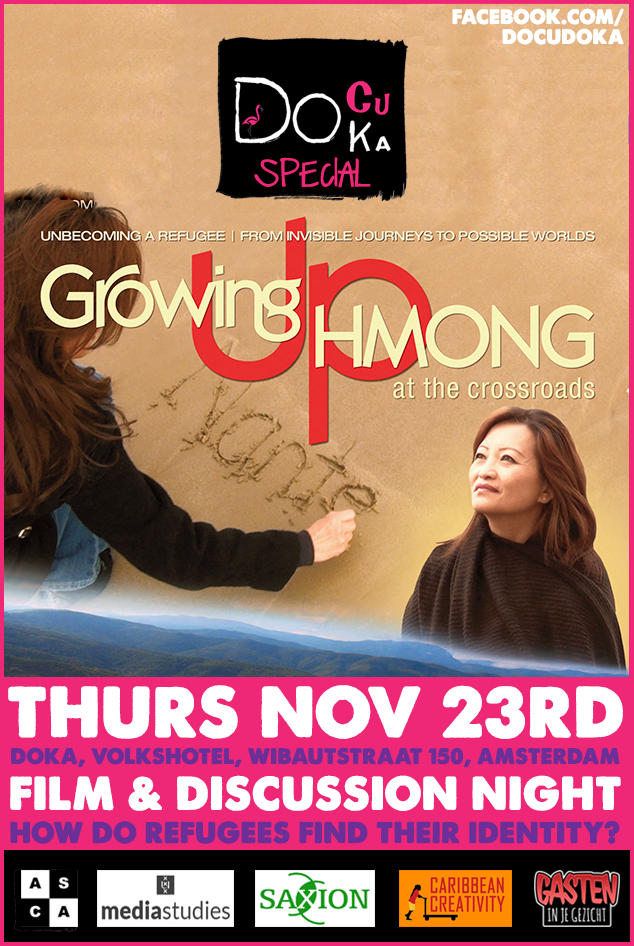